An update from Partner G. Steven Murdock and the I&F Legislative Watch Committee:

As the battle of Rauner vs. Madigan continues in Springfield over pension reform and the state budget, one may think that workers’ compensation reform, one of the priorities on Rauner’s Turnaround Agenda, has been lost in the mix.  Well, one would be wrong, at least to some degree. 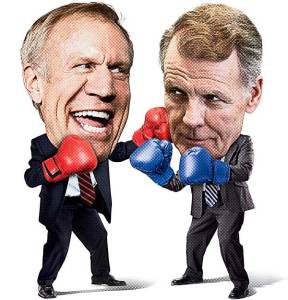 Currently the General Assembly is kicking around at least one of which we are aware that purport to provide some of the workers’ compensation reform sought by Illinois businesses.  For those keeping track, a former reform proposal,  Senate Bill 2901 (SB2901) last heard to exist in the last General Assembly session (the 99th General Assembly) and sponsored by Senate President Thomas Cullerton (D-23rd Dist.) quite literally died on January 10, 2017.  It fell short, from business’ perspective, of true reform, but showed some promise as at least an olive branch from the Senate Democrats to Governor Rauner in an effort to get past the current stalemate in Springfield.

Senate Bill 12 (SB12) sponsored by Senator Christine Rodogno (R-41st Dist.) reportedly amends the Workers’ Compensation Act by defining accidental injuries considered to be “arising out of and in the course of the employment” if an employee is required to travel away from the employer’s premises, sets a cap on maximum compensation rate for a period of temporary total incapacity and a max limit on wage differential benefits to professional athletes, establishes limitations on the number of chiropractic, occupational therapy, or physical therapy visits an injured worker may receive for injuries, confirms that PPD compensation awards for injuries to the shoulder and hip are to be for loss of the arm and leg, respectively, rather than man as a whole, sets the maximum allowable payment for certain service categories, establishes a new process for the assignment and reassignment of arbitrators to hearing sites, requires the creation of an evidence based drug formulary for establishing reasonableness and necessity of those charges, lays out the duties of the Workers’ Compensation Edit, Alignment, and Reform (WEAR) Commission, allows for additional compensation awards where there has been a vexatious delay in the authorization of medical treatment or the payment or intentional underpayment of compensation, and requires annual reports on the state of self-insurance for workers’ compensation in Illinois in addition to some other matters. (We say “reportedly” because this is what is stated on the official website of the Illinois General Assembly as a summary of this bill.)

Both of these bills and what they reportedly propose (or proposed in the case of SB2901) are not all that they seem.  In other words, some of what is proposed as stated above sounds much better than what we have actually read in the proposed legislation.  In fact, much of the proposed reform is not supported by the Illinois Chamber and the business industry, because the changes actually fall short of the what business believes to be “true reform.”   One will note that neither bill makes mention of a new medical causation standard, a main point raised repeatedly since the efforts at reform prior to the 2011 amendments.  It is also important to note that SB12 cannot pass without Senate Bills 1-11 passing.   Those eleven Senate bills, not surprisingly, deal with the following topics:  education, minimum wage, consolidation of three collar counties, issuance of $7B in bonds for the State’s financial obligations, pension reform, state agency appropriations, changes to state gambling licensing, amends the Illinois Procurement Code, taxation on sugary beverages, and municipalities’ control over State funds they receive or are due.  In short, if we work out the pension code and economic woes of the State along with the contested increase in the minimum average weekly wage and a proposal to make local governments more efficient, we may get workers’ compensation reform.  Yes, it sounds like an old song stuck on repeat for the past two years.  The odds of seeing one of these pass is fairly slim unless we see eleven other bills get worked through, but it is happening.

So when you hear about the political wrangling taking place between Team Rauner and Team Madigan over pension reform, a balanced budget, minimum wage and workers’ compensation, know that it is still present and ongoing much like the 100-years War.  We continue to watch the process, and we will continue to keep our readers up to date on the pending efforts to change the Illinois Workers’ Compensation laws and procedures in Illinois.  If you would like to learn more, we are happy to speak with you or your team in more detail, so please do not hesitate to contact us.